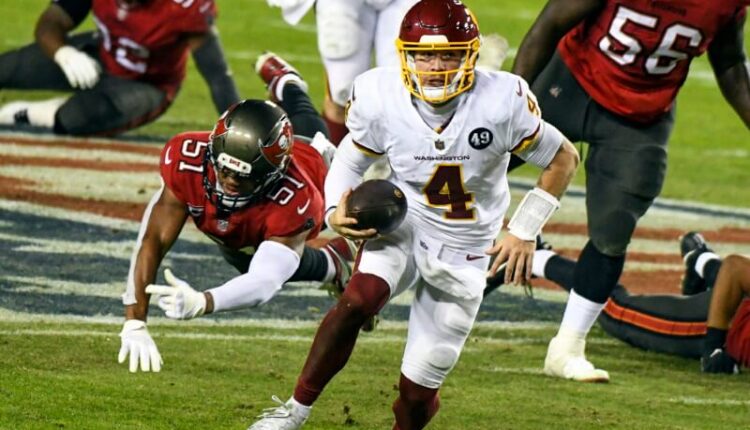 For Week 11, I recommended Tua Tagovailoa against the Jets, Mac Jones against the Falcons, and Cam Newton against the Washington Football Team. Newton dominated a pushover Washington defense and finished as the No. 4 fantasy quarterback on the week, and Tagovailoa had a respectable No. 13 fantasy quarterback finish. Unfortunately for Jones, the Thursday night game was a low-scoring slugfest, and the concern with him all year has been the Patriots’ reliance on defense and the run game, as discussed.

Overall, Week 11 offered some fine options for fantasy GMs who eschewed drafting a quarterback early and have been streaming the position. If you drafted Josh Allen early or managed to snag Tom Brady later on in your drafts, this article probably isn’t for you. But if you’ve been streaming quarterbacks or have Patrick Mahomes or Kyler Murray on bye this week, here are some viable Week 12 quarterback streamers with good matchups who can help your fantasy team win this week.

We’re seeing a rejuvenated Cam Newton in this Joe Brady offense, and it’s not crazy to think that he’s a borderline top-five option again this week after finishing as the no. 4 fantasy quarterback in Week 11. Newton’s rushing production continues to give him a high fantasy floor and ceiling, as he has already run for two touchdowns on his two red-zone carries, and he’s looked adequate as a passer even in just his second week of learning this offensive scheme.

The Dolphins’ defense has struggled this year, having just allowed nearly 300 passing yards and two touchdowns to Joe Flacco this past week. And on the season, Miami’s defense has allowed the fourth-most passing yards per game and the 10th-most points per game. Newton once again has week-winning upside in the matchup, and he should be the clear top priority among the Week 12 quarterback streamers.

The 2021 Seahawks are about as far from the Legion of Boom as you can get. Through 11 weeks, they rank 25th in pass defense, and they’re third in passing yards allowed per game. Their top cornerback, D.J. Reed, missed last week’s loss to Arizona after suffering a setback on his knee and groin injuries and remains questionable for Week 12. Their other starting cornerback, Tre Brown, just underwent season-ending knee surgery. This is a vulnerable Seahawks secondary right now, making Taylor Heinicke one of the top quarterback streamers this week.

Heinicke has been playing fairly well since Ryan Fitzpatrick‘s hip injury and is the no. 13 quarterback in fantasy points per game from Week 2 onward. His production this week could be further aided by the expected return of Logan Thomas, and there’s a chance that Curtis Samuel could be back for Monday night’s game as well. Heinicke is a top-12 quarterback option with a top-five ceiling considering the great matchup and continues to be overlooked by the fantasy community.

Do you feel lucky? Andy Dalton is the most risk/reward option among the Week 12 quarterback streamers. In deeper leagues where Newton and Heinicke are already rostered, Dalton could be a Thanksgiving miracle with Detroit’s defense ranked 28th against the pass and having allowed the third-most points per game through 11 weeks. Even better, the Lions have given up big plays through the air, ranking 27th in completion rate allowed to opposing quarterbacks on targets over 15 yards downfield.

Of course, the concern is that David Montgomery could steal the touchdowns if and when Dalton gets the offense in scoring position. Chicago’s offense has the third-lowest pass rate in the league, and the Bears have the fourth-lowest pass rate in the red zone. Still, even with the risk of Montgomery vulturing the scores and the possibility of Allen Robinson missing this game, Dalton has a high fantasy ceiling in this matchup.

In deeper leagues, if none of the above-recommended quarterback streamers are available, Tyrod Taylor gets the Jets, whose pass defense ranks dead last in the NFL, and he managed two rushing touchdowns in their upset win over the Titans last week, so he has some rushing upside as well. And if you’re desperate, Matt Ryan could be a serviceable option against a Jaguars team that ranks second-worst in pass defense despite a couple of rough outings from the Atlanta offense over their last couple of games.