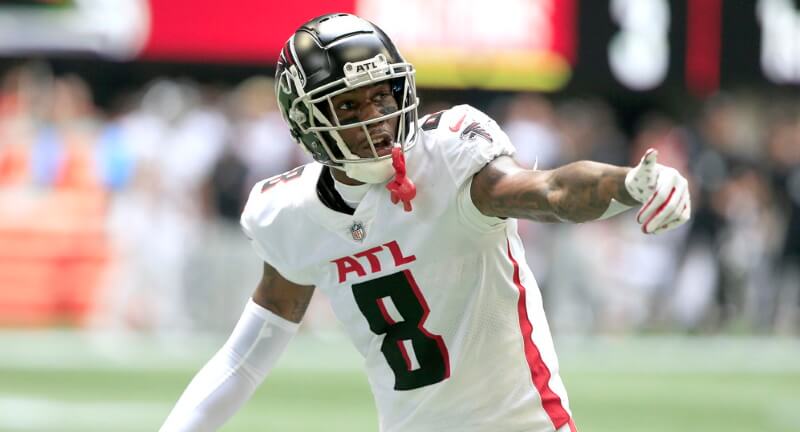 If you’re reading this, your league doesn’t have a trade deadline, or it hasn’t passed yet. That also means you’re looking to wheel and deal ahead of Week 12. That’s a good thing. Trading is a great, and often necessary, tactic to win your fantasy football league. It also means you’re still in contention. That’s a great thing. Let these buy low and sell high candidates guide you in the right direction of making league-winning moves.

Below, I nominate a few trade candidates at running back, wide receiver, and tight end to sell high and buy low on. For any specific scenarios or further elaboration on the ideas surrounding the inclusion of these players in your trades, find me on Twitter @Colin_McT!

I’m one of those people who thought Freeman’s days of fantasy relevancy were over. Especially when the Ravens lost their entire training camp group of running backs in a matter of days earlier this season, Freeman just seemed like one of many backs who would cycle through this season. In most games, he has, with Ty’Son Williams, Latavius Murray, and even Le’Veon Bell leading the way at times.

However, as the season has progressed, Freeman appears to be the lead back in Baltimore. Bell has since been waived and Williams doesn’t see the field if he even dresses for the game. In the last three games, Freeman has been the lead ball carrier, rushing 39 total times and adding 13 total targets in the passing game. The big factors for the workload, however, seem to be the absence of Murray in Weeks 9, 10, and the absence of Lamar Jackson in Week 11.

With Lamar likely due back next week following his recovery from a non-Covid-19 illness, and Murray back in the mix, I foresee Freeman’s touches declining slightly. This team loves to run the ball, but will likely act as a committee of Freeman, Murray, and even Lamar, who’s averaging 11.7 carries per game played.

Following Freeman’s top performance of the season, now is the time to sell high. I don’t expect another 20.0 point, top-10 finish from Freeman again this season, or in his career. It’s time to move him to a running back needy team.

The life of a manager with Mike Williams on their roster isn’t an easy one. That’s why I’m here to tell you to sell high and not make it any harder on yourself.

Through the first five weeks of the season, Williams was arguably the steal of 2021 fantasy football drafts. He caught 31 of 51 targets for a whopping 471 yards and six touchdowns. Over the next four games, however, Williams saw just 21 targets, hauling in just 10 of them, for 137 yards and no scores.

I’d be happy to be bet that most Williams managers have kept him in their lineups waiting for the next boom. At a glance, it looks like Week 11 was his return to the top with his 5/97/1 stat line, but that didn’t even really come to fruition until late in the 4th quarter when he caught a game-winning 53-yard touchdown pass. That accounts for 12.3 of his 20.7 PPR points for the week.

The Chargers have a potent offense. They are top-five in scoring (29.3 points per game) in their last three games. Their 41 points on Sunday Night Football this past week is tied for the highest of Week 11. Unfortunately, though, for Williams, he didn’t even see 15% of the team’s target share in the big win. It’s becoming clear that Keenan Allen and Austin Ekeler are the only skill players to trust in this offense on a week-by-week basis. Sell high on Williams as he is simply a boom-or-bust player that got off to a hot start.

Zach Ertz is now in the sell high conversation as a Cardinal. A few weeks ago, I mentioned buying low on him as a Philadelphia Eagle. The rumors surrounding an Ertz trade proved to be true and it’s the best thing that’s happened for him. Not only is he on the current top-seeded Cardinals in the NFC, but he’s a key contributor to their offense as of late.

That’s the reason I have him as a sell-high candidate. In the last three weeks, without Kyler Murray under center, Ertz is fantasy football’s TE3. He is coming off of a Week 11 TE1 finish having posted 28.8 PPR points against the Seattle Seahawks. Now, entering the Cardinals Week 12 bye, I think is the time to sell high on Ertz to a manager who believes in his productivity for the rest of the season.

Two reasons I don’t want to bank on Ertz are due to the impending return of not only the aforementioned Murray, but the team’s best receiver, DeAndre Hopkins. In games where Kyler Murray has been under center for the Cardinals, the tight end position has only accounted for 11.7% of the team target share. Murray’s backup, Colt McCoy, is obviously one to thank for leaning on Ertz during Murray’s absence. Furthermore, once Ertz joined the team, he saw just a slight increase to 15% of the target share in games with Murray under center.

I’ve always said it’s hard to trade a tight end that’s producing. Ertz is no different. However, if he is one of two on your roster, and you can get by with the other, sell high on Ertz for another position of need.

This feels like déjà vu. Last season, Montgomery took multiple fantasy football teams to the championship finishing as the overall RB3 from Weeks 11 to 16. It all kicked off at the end of November when he racked up 143 all-purpose yards and a score in Green Bay. Then, from Weeks 12 on, Montgomery found the end zone an additional seven times and totaled at least 112 all-purpose yards in all five games to end the fantasy season.

Week 12 last season, Montgomery had 21 total touches and found the end zone twice against the Detroit Lions. In Week 12 of this season, Montgomery gets the Lions again, this time on Thanksgiving for another dream matchup. Not only is Detroit allowing the second-most rushing yards per game (140.5), but it looks like Andy Dalton could be under center for the Bears if Justin Fields can’t play through bruised ribs.

Regardless, in the last two weeks, since his return from injury, Montgomery is dominating the Bears backfield touches. He’s averaging 15 opportunities (carries + targets) with a significant 84% of the running back carries. With the extra rest from the Bears Week 10 bye, Montgomery should be as ready as ever for a strong finish to this season. I expect him to crack the top-10 in rankings most weeks, higher than where he’s been recently. Managers should buy low before a tasty Thanksgiving Day matchup and look forward to a favorable playoff schedule that includes the Vikings, Giants, and Seahawks fantasy-friendly run defenses.

Not only is Gallup back on the field for the Cowboys, but he is potentially the WR1 for Dallas ahead of Week 12. On top of Amari Cooper testing positive for Covid-19 last week, Ceedee Lamb also got knocked out of Sunday’s game with a concussion. There’s no such thing as a “mild” concussion, but regardless, Lamb’s head bounced off of the ground in the end zone and his Week 12 status, like Cooper’s, is unfortunately now in jeopardy.

That leaves Gallup as the top option at the position in Dallas. In just three games this season, Gallup is averaging just over seven targets per game. Since his return from injury two weeks ago, Gallup has 15 targets to his name. With Cooper out, and Lamb exiting early, Gallup racked up 10 targets on a massive season-high 94% of snaps in Week 11. It was, however, a bad day at the office for the Dallas offense. Gallup was only able to record five catches for 44 yards and the team failed to score a touchdown in a 19-9 loss to the Chiefs.

The Cowboys’ performance likely leaves a bitter taste in the mouth of any manager with key fantasy players on their team. If so, Gallup sets up as a prime buy low candidate this week. With the two aforementioned receivers out, I fully expect Gallup to lead the team in snaps and targets again on a short week. Even beyond, Gallup presents high-end PPR flex value on one of the highest-scoring offenses in the league.

It’s worth mentioning they play Washington twice (Weeks 14 and 16), who are allowing the fifth-most passing yards per game. With that said, Gallup could be the finishing touch to a championship fantasy roster in 10 to 12 team leagues.

The buy low window for Kyle Pitts is back open. Pitts has just 5.1 fantasy points more in the last four weeks (28.4) than he did in Week 7 alone (23.3) coming out of the bye. He’s coming off of a Thursday night primetime game where the entire fantasy football community saw him bottled up for just three receptions for 29 yards on five targets. That’s a grand total of just 5.9 PPR fantasy points.

Whoever is starting Pitts week to week may be at their wit’s end. The rookie hasn’t lived up to the high expectations many set for him, and somewhat justifiably as the 4th-overall pick in the 2021 NFL Draft. With that said, now would be the best time to buy low.

If you look beyond the surface of Pitts’ points from Week 11, you will see that he was double-covered on 31% of his routes run. It’s par for the course for Bill Belichick to scheme up a game plan to take away the opposition’s best player. Even with this most recent letdown performance, Pitts is still the PPR TE8 on the season. What’s encouraging, too, is he played his third-highest snap count of 81% and leads the Falcons in targets with 64 this season. Furthermore, Pitts has 25 targets in four games since Calvin Ridley stepped away from the team for personal reasons.

It’s rare to find usage like Kyle Pitts’ at the tight end position. I believe this is rock bottom, as far as points scoring goes, especially after facing the New England Patriots defense, who are the toughest matchup for tight ends. Take this golden opportunity to buy low on Pitts to cement into your lineup for the rest of the season.