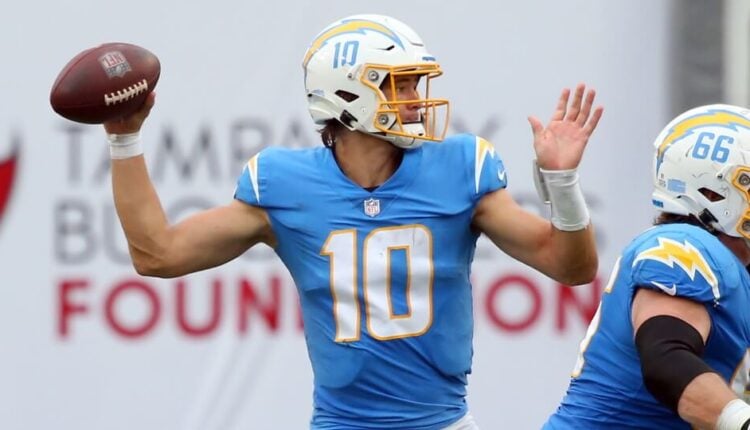 In the playoff edition of the 2020 fantasy football rest of season rankings, we make some final adjustments. After this point, fantasy managers should take each matchup week by week. From this point on, we won’t have a weekly article dedicated to the 2020 fantasy football rest of season rankings. However, I’ll likely update and adjust the rankings weekly to reflect in this article. Make sure to check out Mick’s weekly flex rankings and Justin’s weekly PPR rankings to help in Week 13.

Insert the sad emoji for Will Fuller with the news of his suspension ruling him out for the rest of the season. Fuller had a productive 2020 season with 53 receptions (No. 20), 879 receiving yards (No. 10), and eight total touchdowns (No. 7). His opportunities ranked highly as well, with a 21.4% target share (No. 32), 980 air yards (No. 13), and 34.2% air yards share (No. 15). As always, we mention notable risers and fallers in the 2020 fantasy football rest of season rankings for PPR leagues. When considering whether players rise or fall, we analyze opportunities and efficiency when we look at fantasy production.

Admittedly, I ranked rookie Justin Herbert too low, and he deserved to move up the rankings. Herbert ranks 8th with 3,015 passing yards, 11th with 3,020 air yards, and 5th with 41.6 team pass plays per game. He also ranks highly in the efficiency metrics with a +15.0 Production Premium (No. 9), 7.5 yards per attempt (No. 14), and 24.0 fantasy points per game (No. 5). Outside of Week 10 against the Dolphins, Herbert continues to impress with the passing yardage, production, and efficiency.

After his long-awaited return, Austin Ekeler bursts onto the scene in Week 12 with 25 touches for 129 total yards. He earned a season-high 16 targets for a beautiful box score in PPR leagues. With that said, Ekeler moved into the top-3 amongst running backs in the 2020 fantasy football rest of season rankings. Similar to Ekeler, we anticipate and hope for the return of Christian McCaffrey after the bye week.

A couple of other notable risers at the running back position includes Raheem Mostert and J.K. Dobbins. With Mostert, he returned in Week 12 and totaled 18 touches for 43 total yards and one touchdown. Although the yardage ranked lowly in Week 12, Mostert displayed high efficiency on the season with a +36.0 Production Premium (No. 4) through five games. In four out of five games this season, Mostert totaled 14 to 19 touches. Against the Jets in Week 2, Mostert totaled ten touches for 107 total yards with one touchdown. However, he left the game with an MCL sprain, meaning Moster could’ve ended with a much bigger game. Assuming health, stock up for Mostert moving forward.

In terms of risers at wide receiver, Brandin Cooks headlines the list with the Will Fuller suspension. From Week 5 through Week 12, Cooks ranked 16th with a 25% target share, 14th with 42 receptions, 7th with 581 receiving yards, and 20th with a 0.59 Weighted Opportunity Rating (WOPR). Although Deshaun Watson’s numbers with Fuller look much better, Cooks should take on a higher target share, meaning more opportunities for production.

The only notable quarterback faller involves Lamar Jackson with the struggles throughout the 2020 season. With the low passing volume of 29.5 team pass plays per game (No. 31), Jackson lacked productivity and efficiency. Through ten games, he totaled 1,948 passing yards (No. 24) with 7.1 yards per attempt (No. 23) and a -1.3 Production Premium (No. 17). Jackson still ranks as a QB1, especially with the rushing floor, but he regressed in the efficiency department compared to 2019 when he finished with a +40.3 Production Premium (No. 2). Add in the fact that Jackson tested positive for COVID-19, and it provides additional concerns at least for one more week.

A few notable fallers include Kareem Hunt, Clyde Edwards-Helaire, and Chase Edmonds. With Hunt and Edwards-Helaire, it’s due to other running backs jumping ahead and the change in workload. Over the past three games, since Nick Chubb returned, Hunt still had a high workload of 22, 14, and ten touches. However, Hunt hasn’t produced much over the last two games. With Edwards-Helaire, he continues to share snaps with Le’Veon Bell and Darrel Williams while also receiving limited opportunities.

As Kenny Golladay misses time, he falls farther down the rankings. Although Tyler Boyd received six targets for a 21% target share in Week 12 without Joe Burrow, it’s hard to trust targets from Brandon Allen. With that said, Boyd keeps dropping into the WR3 range in the 2020 fantasy football rest of season rankings. D.J. Moore is another notable receiver that fell in the Week 13 update due to the ankle injury concerns. Thankfully the Panthers have their bye week, and X-rays were negative on Moore’s ankle, but monitor the injury news here.

If you enjoyed Corbin’s Rest of Season Rankings, make sure to check out the rest of our Week 13 Analysis for more help in optimizing your lineups.