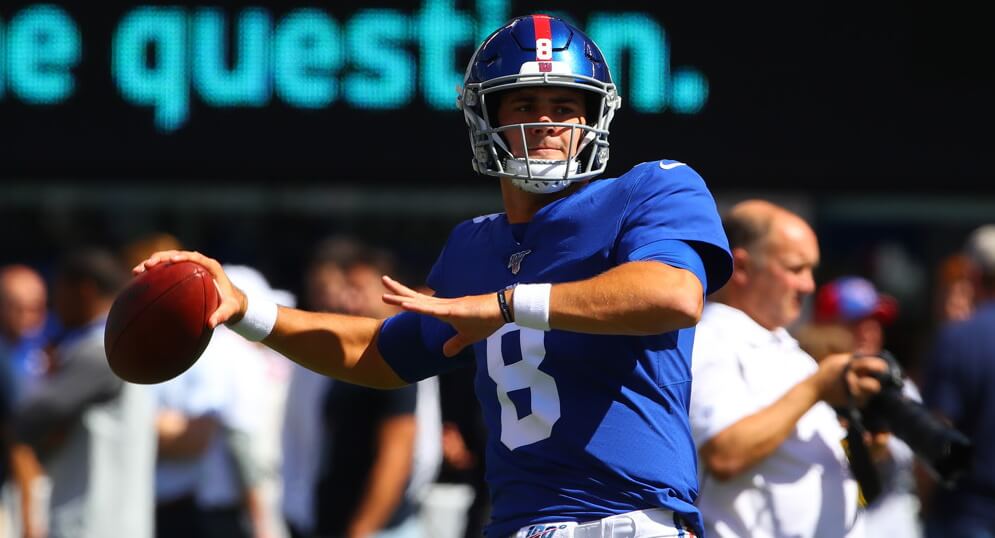 It’s a deep quarterback position this year with a bunch of great options. With so many viable quarterbacks, leagues should consider changing to a superflex league if they haven’t already. Before we get to our list of 2020 quarterback sleepers, we first need to define the term “sleeper.” For the purpose of this article, a sleeper will be defined as a player that will outperform their ADP. Or a player that’s undervalued because of their 2019 statistics.

Matt Stafford played in eight games last year and finished with 2,499 passing yards, 19 touchdowns, and five interceptions. A full season pace would have been right under 5,000 passing yards and 38 touchdowns. That would’ve ranked first in the NFL in passing touchdowns and second in passing yards behind Jameis Winston.

In eight games last year, he ranked 4th with 20.8 fantasy points per game. Now in 2020, he’s being drafted as the 13th quarterback with a Fantrax ADP of 103. In five games, he finished in the top-6 at quarterback, and in two other weeks, he finished in the top-20. The Lions were also one of the worst defenses in the league allowing over 400 yards that ranked second to last. So expect the Lions to be playing from behind and continue passing the ball.

The Lions drafted running back D’Andre Swift in the second round of the 2020 NFL Draft, and he’s expected to share carries and touches with Kerryon Johnson. Hopefully, the addition of Swift will help with the play-action passing game although the Lions offensive line was in the bottom half of the league last year.

Stafford still has great pieces in the receiving game with Kenny Golladay, Marvin Jones, and T.J. Hockenson. The last report on Hockenson in mid-June explains he’s still dealing with an ankle injury. However, once healthy Hockenson will be a backend TE-1 and another weapon for Stafford in the passing game.

It wouldn’t be surprising if Stafford passed for 4,500 yards and 32 touchdowns, which would’ve put him in the top-6 quarterback conversation last year. If you’re waiting on a quarterback in a 1-QB league, then Stafford’s a great middle-round target. In superflex leagues, he’s a back end QB-1 or low end QB-2 in drafts which provides great value.

Rookie sensation Daniel Jones appears to be the quarterback of the future for the Giants. In 13 games, 12 being starts, he threw for 3,027 passing yards, 24 passing touchdowns, and 12 interceptions. Jones also finished with 279 rushing yards and two rushing touchdowns. If we look at these stats across a full season, Jones would’ve finished with over 4,000 passing yards and 30+ passing touchdowns. According to Pro Football Reference, Jones threw the third most touchdowns amongst rookie quarterbacks from 2000-2019.

The Giants, like the Lions, were another pass-heavy team that finished top-10 in passing attempts. Their line ranked in the bottom-10 in run blocking and middle of the pack in pass protection according to Football Outsiders. They did add a few offensive linemen in the draft and free agency, so hopefully, that improves a line that struggled last season.

There’s a handful of solid receiving weapons with Darius Slayton, Sterling Shepard, Golden Tate, and tight end Evan Engram. They obviously have one of the best running backs in the league in Saquon Barkley to help alleviate the pressure on Jones. Daniel Jones’ Fantrax ADP of 124 makes him the 16th quarterback drafted, but he should be valued as a top-12 quarterback in 2020. Don’t forget that Jones also provides a rushing floor which we love to see with quarterbacks and a great late-round quarterback sleeper.

Jared Goff led the league in passing attempts and finished third in passing yards. Last season Goff ended with 4,638 passing yards, 22 touchdowns, and 16 interceptions. The touchdown to interception ratio isn’t great, but that’s some amazing passing volume so the passing touchdowns could tick up in 2020. Dak Prescott and Jameis Winston were the only two quarterbacks to throw for more yards but finished with 30+ passing touchdowns. Goff struggled with efficiency last year and ranked 27th in production premium on Player Profiler.

Mostly due to the low number of passing touchdowns, Goff finished 20th amongst quarterbacks with 15.5 fantasy points per game. He had a few great stretches last year with one really rough game against the 49ers where he threw for under 80 passing yards. Goff threw for over 260 passing yards nine times and in four of the nine games passed for 300+ yards. In two of the four games, he ended with 424 and 517 passing yards. He puts up high passing yard totals, but the touchdowns need to come along with it.

In the offseason, the Rams drafted running back Cam Akers while subtracting Todd Gurley and Brandin Cooks. They still have two of the best and somewhat underrated receivers in Robert Woods and Cooper Kupp. Goff’s currently the 18th quarterback drafted with a 131 Fantrax ADP. He’s a quarterback sleeper coming into 2020 and due for positive touchdown regression. Goff produced similar passing yardage with over 4,600 passing yards two years in a row. The main difference being the passing touchdowns dropping by ten last year. At this ADP, there’s a good chance he will outperform it and rank in top 10-12 at quarterback.

Gardner Minshew took over as the Jaguars’ starting quarterback in week one after Nick Foles went down with an injury. After that, Minshew took off running and burst onto the NFL scene. As a 6th round pick and a wonderful mustache, he finished with 3,271 passing yards, 21 passing touchdowns, and six interceptions. He also used his legs and rushed for 344 yards over 14 games. He also fell on the list of rookie quarterbacks from 2000-2019 that threw for over 3,000 passing yards and 20+ touchdowns.

The Jaguars threw the 10th most pass plays per game last year and often in a negative game script. They have a great all-around running back in Leonard Fournette to go along with D.J. Chark as their lead wide receiver. Minshew finished 19th with 15.9 fantasy points per game that’s right above another quarterback sleeper on this list, Jared Goff. Baker Mayfield and Sam Darnold averaged less fantasy points per game but they’re being drafted before Minshew. His Fantrax ADP of 163 makes him the 24th quarterback drafted. He’s definitely more of a deep league streamer or a back end QB-2 in superflex leagues.

If you enjoyed Corbin’s Quarterback Sleepers, check out his work in our Consensus Quarterback Rankings for 2020 Fantasy Football.