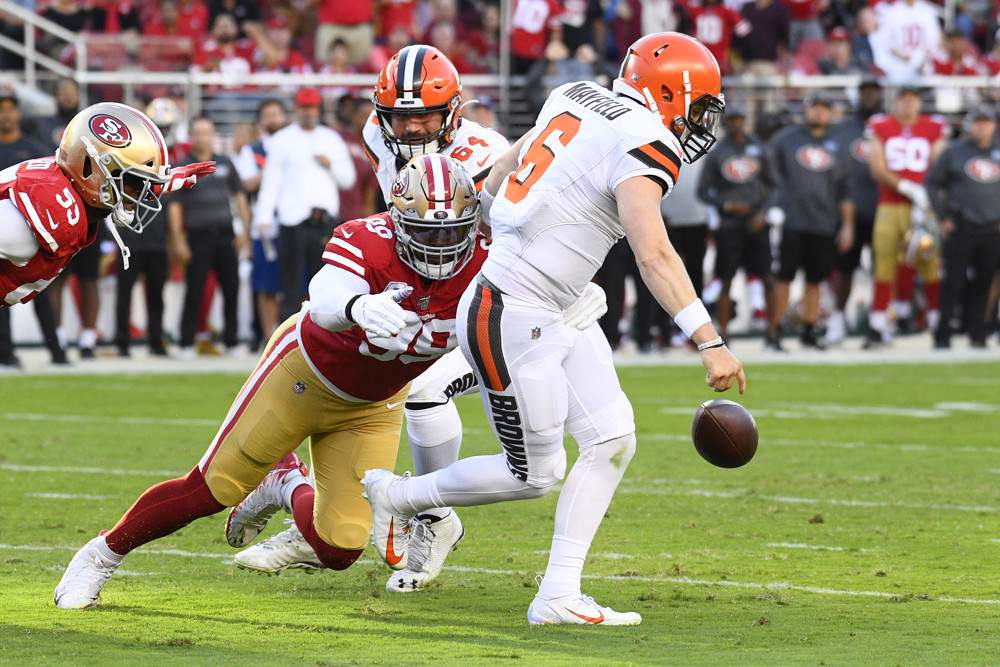 Last time we looked at a few quarterback sleepers. This time we’re looking at three quarterback busts. First off, let’s define the term bust. No we’re not talking about the hall of fame statues. We’re talking about players that will finish lower than their ADP or expectations. Sometimes we need to pump the brakes on players who’s stocks are trending down.

One of these quarterback busts was once at the top of the rankings. Another is young quarterback that threw the second most interceptions last year behind Jameis Winston. The third quarterback had an amazing run last year and may have helped teams win fantasy leagues. However, these quarterbacks will be busts in 2020 for various reasons. Let’s find out why.

We remember Aaron Rodgers in those State Farm commercials and spelling out R-E-L-A-X, and now it’s time to relax and fade Rodgers for fantasy purposes. First let’s look at his 2019 statistics. Last year Rodgers finished with 4,002 passing yards, 26 passing touchdowns, and four interceptions with 183 rushing yards and one rushing touchdown. He averaged 17.4 fantasy points per game that ranked 13th amongst quarterbacks. In 2018, he averaged 19.5 fantasy points that ranked 9th at the position.

Now let’s look at the past production and trends for Rodgers. We’re throwing out 2017 because he suffered an injury and played only seven games.

We can see a gradual trend down in fantasy points per game from Rodgers. When looking back at the 2015 season, that’s the year the Packers lost Jordy Nelson to a season-ending knee injury. Davante Adams was only in his second season and hadn’t broken out yet. Their leading receivers were Randall Cobb and James Jones who received just over 1,700 yards combined.

We’ve seen great fantasy seasons out of Rodgers, but it’s concerning to see the passing touchdowns drop the last two seasons. It’s hard to envision a scenario where he’s back in the top 6-8  conversation even though Adams and Aaron Jones will still be productive. Rodgers would need to finish with 5,000 passing yards, throw more touchdowns, or rush for more yards and touchdowns to be back in that conversation.

Let’s look at the difference in passing and rushing attempts the last two seasons. The Packers hired Matt LaFleur in January 2019 and the offense changed to be more run focused. Those were pretty drastic changes in rushing attempts and passing attempts per game. The yards allowed by the Packers’ defense was almost identical, so it appears the commitment to running the ball impacted the game script. Keep in mind that the Packers invested a 2nd round pick in 6-foot 245-pound running back in A.J. Dillon to add backfield depth.

Last year, he finished top-12 in six games including three top-3 finishes. However he finished with under 15 fantasy points in 10 games last year. In those 10 games, he averaged 11 fantasy points per game and that’s a low floor for a player drafted as a top-10 quarterback.

He currently has a 89 Fantrax ADP which makes him the 10th quarterback drafted in between Matt Ryan and Tom Brady. Rodgers being the 10th quarterback drafted isn’t too far off from where I have him ranked at QB-11, but his stock is trending down. Matt Ryan’s a better option with an almost identical ADP or wait 15 picks later to take Matt Stafford. Both Ryan and Stafford project for more passing volume than Rodgers. Outside of Davante Adams, the Packers don’t have any other established receiving weapons.

The next quarterback bust – Baker Mayfield. The Browns have so much offensive talent, which is probably not a statement you thought we’d say right? In all seriousness, the Browns are loaded with offensive weapons. Last year Mayfield finished with 3,827 passing yards, 22 passing touchdowns, and 21 interceptions. Yikes! He also added 141 rushing yards and three rushing touchdowns.

Mayfield threw about 100 more passing yards compared to his rookie year, but the passing touchdowns dropped and interceptions increased. That’s not a trend in the right direction. His completion percentage also dropped from 63.8% to right under 60%.

Now let’s look at the offensive tendencies for the Browns. Last season the Browns ranked 12th with 118.8 rushing yards per game. In terms of the passing game, they ranked 20th with 222.1 passing yards and 33.7 pass attempts. The Browns have a new head coach in Kevin Stefanski. Do you know how many pass attempts per game the Minnesota Vikings threw with Stefanski as the offensive coordinator? They threw 29.2 pass attempts per game, which ranked 30th last year. Mayfield’s already limited passing volume will continue to drop next year.

In four weeks last season, he finished in the top-10. During that four week span he averaged 20.77 points per game. However in seven other weeks, he finished top-15 or worse with five of those weeks being dreadful. In those seven weeks where he finished top-15 or worse, he averaged 8.82 points per game. Oh and he even sprinkled in a fun -2.0 fantasy points in week 5 against a tough 49ers defense. Those poor finishes can lose you a week.

Mayfield’s the 15th quarterback drafted with a 122 Fantrax ADP. I currently have him as QB-19 in my rankings. With Stefanski as the head coach and the limited passing volume, signs point to Mayfield regressing even more. If he can utilize his offensive weapons in Odell Beckham Jr. Jarvis Landry, Austin Hooper, Nick Chubb, and Kareem Hunt, then we may see an uptick in production. The quarterback position is deep, so use the wait and see approach in a 1-QB league. If it’s a superflex league, then he’s obviously more valuable.

Why dwell on the negative? Head on over and check out Corbin’s favorite Quarterback Sleepers for 2020 Fantasy Football!

Ryan Tannehill went from forgotten veteran to the hottest fantasy quarterback to finish 2019. He took over the starting quarterback job in week 7 and never looked back. Last season Tannehill ended with 2,742 passing yards, 22 passing touchdowns, and six interceptions with 185 rushing yards and four rushing touchdowns.

First let’s talk about his 7.7% touchdown rate, which ranked second only behind Lamar Jackson. That’s an unsustainable touchdown rate with the team’s low passing volume. The Titans finished dead last with 26.9 pass attempts per game and ranked 7th with 28.7 rushing attempts per game. Since they have Derrick Henry who led the NFL in rushing yards last year, it’s hard to imagine the passing volume increasing.

Last season, Tannehill ranked first in production premium and supporting cast efficiency amongst quarterbacks on Player Profiler. Last season his 9.6 yards per attempt were a career-high, and almost 2.5 yards above his career average. It’s unlikely that Tannehill sustains that efficiency in 2020.

If Tannehill played a full season last year, he was on pace for over 4,300 passing yards and 35 passing touchdowns. Both of those numbers would’ve been career highs on a team that ranked 8th in rushing attempts per game and last in passing attempts per game. Again, all signs point to negative regression with his efficiency and touchdown rate.

On Fantrax, he’s got a 120 ADP as the 14th quarterback drafted right in front of Baker Mayfield. Tannehill’s a bust where he’s going in drafts, and I have him ranked past QB-20. Unless it’s a superflex league, it’s best to not expect continued extreme efficiency from Tannehill this season. He’s more of a streaming quarterback in 1-QB leagues.

Which quarterback busts are you avoiding in early drafts? Let us know in the comments below.