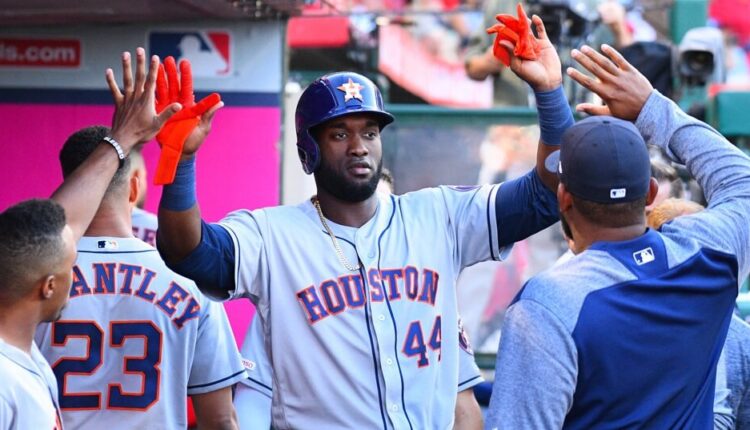 With the conclusion of the 2019 regular season right around the corner, it’s time to look to the future. With that in mind, I assembled the stellar crew here at Fantrax HQ for a little 2020 fantasy baseball mock draft action. There was no shortage of noteworthy picks, beginning right away at 1-1. We drafted six rounds with 12 teams, with standard roto categories in mind. After everything was done, I reached out to each drafter with a question about a specific player they drafted or draft strategy they employed. You’ll hear feedback from six of the drafters here and from the other six in part two. Part two is coming soon and will focus on rounds 4-6.

The Draft Results: Round 1 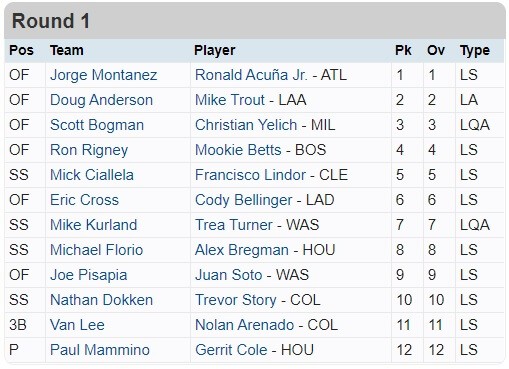 A: Mike Trout may be the safest pick but Ronald Acuna is approaching a 40/40 season, something even Trout has never done. Given that this is a standard roto draft, the potential of getting elite production in all five categories including steals upwards of 40 is too good to pass as the first pick in the draft. Acuna will be just 22 years old going into the 2020 season and I’m excited to see what’s in store for this young phenom.

Trout has been incredible as hands down the best player in the game for what’s going on a decade now. However, I just don’t think we’re going to see him run as often as we’re accustomed to as evidenced by his steal total of 11 this year. When it comes to power, would anyone have serious doubts that Acuna could reach 50 home runs in today’s game? The difference in steals is enough for me to take Acuna over Trout.

The Draft Results: Round 2 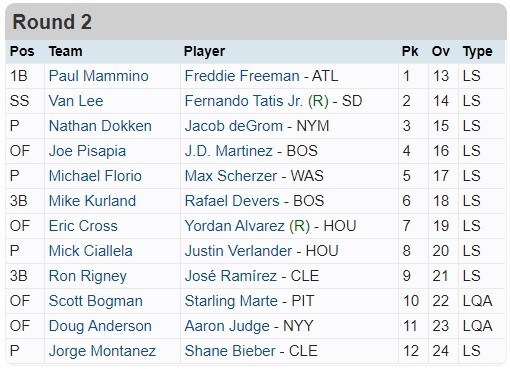 Q: It’s been a heck of a half-season for Yordan Alvarez, but it’s still just a half-season. What do you expect from him in 2020 to justify a second-round pick?

A: Not many prospects can burst onto the Major League scene as Yordan Alvarez did. But was it really much of a surprise? All the guy did was go all Babe Ruth on the PCL for a couple of months, more than earning his promotion to Houston in early June, ahead of another uber-talented prospect in Kyle Tucker. The insane pace Alvarez has been on since that promotion has been incredibly fun to watch, and in my opinion, close to being sustainable in 2020.

Throughout Alvarez’s minor league career, he displayed a plus hit tool and double-plus raw power, both of which he flexed consistently during his rookie season. On top of that, he can draw plenty of walks and doesn’t strike out as often as most sluggers of his magnitude. I’ve been on record as saying he’s basically Pete Alonso with a better hit tool. For that reason, I feel very confident taking him in the second round and wouldn’t fault anyone for taking him close to the first round either. Alvarez is a four-category monster.

Q: At the halfway point of 2019, it sure didn’t look like Jose Ramirez would be a second-rounder in 2020. Are you confident that he returns to being a foundational player?

A: I don’t know if foundational is the word I would use for him since I think of those guys as being the Trout’s, Acuna’s, and Yelich’s of the fantasy baseball world. However, I think he will settle in somewhere between his 2017 and 2018 production. I think an argument could be made that I took him a bit early, and that’s fair, but I was afraid he may not make it back to me in the third round.

2019 saw him battle injuries and play just 126 games. Even in a down season, he provided 20 homers with 24 steals. He just didn’t provide the slash line we have gotten used to. That will change next season. I think he bounces back and returns solid value for where he will go in drafts. I’m a believer in a 2020 bounce back.

The Draft Results: Round 3 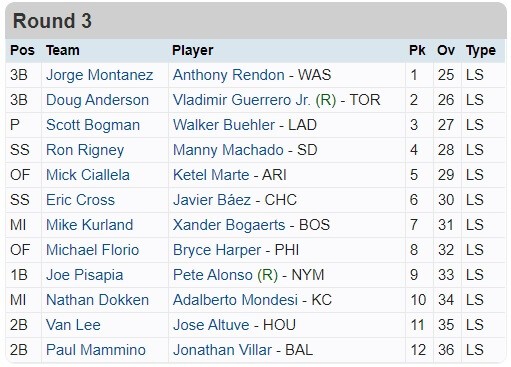 A: It’s probably a bit early to be reaching for upside, but I feel like power is so deep that I can take a bit of a risk here for someone who has the ability to hit .320+ starting in 2020. I don’t feel like the top tier of hitters is as deep as in recent years, so reaching for someone with that obvious ability is something we can get away with.

Q: So, self, are you worried that you reached on a glorified fantasy rabbit in the third round?

A: Well, self, I’m not, and I’ll tell you why. Mondesi isn’t just a rabbit – he is a category-winner. He is currently neck-and-neck with Mallex Smith for the lead league in steals but in 27 fewer games. Unlike Smith, Mondesi is also a good defender at a premium position, which will keep him on the field during slumps. I do worry about slumps, though. His abysmal 63% contact rate is horrifying, but his elite 29.9 ft/sec sprint speed helps keep his BABIP very high. Even if he hits .240, the elite steals are worthwhile. You need to be smart about drafting the other four categories though since taking Mondesi this high is a drain in that regard. I actually think he will be going even higher than this when 2020 draft season hits, but this is about as high as I’d be willing to draft him.

A: The pick of Villar is one that we will look back on in 2020 and will either make me look like a genius or an idiot. Coming into 2019 I was heavily targeting Villar as one of the few stolen base threats that provided some value elsewhere going outside the top 3-4 rounds. As for 2020, I am fairly confident that Villar can replicate this success mainly as there is no real threat to his playing time.

Villar struggled to begin 2019, but since the Orioles had no one else to play, he was able to work through his struggles and has dominated ever since. As for the underlying skills, Villar lowered his strikeout rate without sacrificing power. While he is still ground ball heavy, he jumped his fly ball rate almost 5% points.

The most positive trend was that the Orioles still let him run despite their new analytically inclined GM. There was some concern that they would hold back Villar, which would have killed his value. Playing half his games in Camden Yards and a large percentage in the other AL East parks gives me confidence he can replicate the power numbers while still remaining one of the best stolen base threats in the game.

Got a beef with any of the picks in our 2020 fantasy baseball mock draft? Call out our analysts in the comments below. For more great analysis from Nathan check out his full archive.