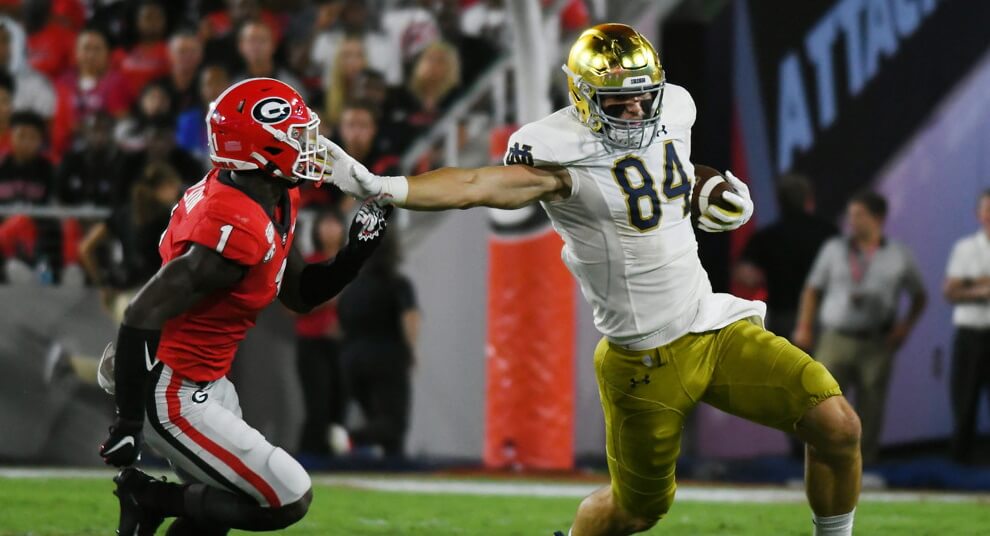 There are sure to be a lot of variations in ADP past the top two picks in rookie drafts this year, as there are a great number of rookies with high potential in the 2020 class. With rookie draft season in full swing, fellow Fantrax dynasty football writer Ron Rigney and I decided to do a 2020 dynasty football rookie mock draft between the two of us. You can find the results for Round 1 here and Round 2 here.

Here are our picks for the third and final round of the dynasty football rookie mock draft assuming a 12-team PPR, start one quarterback format, and we’ve provided short blurbs for each of our respective picks detailing our reasoning.

As with a lot of picks when we get to the later rounds of this rookie mock draft, McFarland is a dart throw.  There is potential here, but he will need some help to succeed in his career.  Throughout high school and his college career at Maryland, McFarland has been hampered by injuries, making his 2018 highlight reel his main body of work.  McFarland’s durability remains a question mark due to his aggressive running style, and he isn’t a big back at 5’8 and 208 lbs.

Behind Pittsburgh’s solid offensive line though, McFarland could be productive.  And while he slots in as the fourth running back on a crowded Steelers’ depth chart, an injury ahead of him could lead to meaningful playing time, and his upside makes him stash-worthy.

The Raiders’ selection of Edwards in the third round of the 2020 NFL Draft was overshadowed by their selection of Henry Ruggs with the 12th overall pick. While Ruggs figures to be the more lethal deep threat and should see usage on screen passes and misdirection plays as well, the 6’3 Edwards is built to be the more dominant possession receiver and red zone threat given his size and incredible contested catchability.

The concern for both rookie receivers, though, lies in their quarterback, Derek Carr. In each of the last two seasons, Carr has been in the bottom-three quarterbacks in average intended air yards, rarely targeting receivers downfield. He was also the second-least aggressive passer in the league in 2019 in targeting receivers in tight coverage. The best hope for both Edwards and Ruggs would be if Las Vegas drafts a more aggressive quarterback in 2021.

Denver’s selection of Hamler is one of my favorite landing spots from the NFL Draft.  The Penn State burner can slide into his play-making role out of the slot and be a perfect complement to Courtland Sutton and first-round pick Jerry Jeudy.

I expect Denver to maximize Hamler’s skillset and use him as a multi-dimensional weapon, and his speed could lead to a few field-stretching home run plays as well.  His size could make durability an issue, but if used correctly, Hamler has an opportunity to blossom into a solid flex play for fantasy purposes.

At Arizona State, Benjamin was a powerful runner who excelled at creating yards after contact, and he was a capable pass-catcher as well, having caught 77 passes in his two years as a starter. Benjamin isn’t going to supplant Kenyan Drake as the starter in Arizona, and he probably won’t even play over Chase Edmonds.

That said, the seventh-round rookie pick is an elusive all-around back who could have fantasy potential in this high-flying Cardinals’ offense if either Drake or Edmonds were to miss time. And with Drake on a one-year transition tag, his long-term future with Arizona is still uncertain. Benjamin has starter potential in 2021 and beyond.

The biggest knock on the Notre Dame product is his ability to block.  Luckily, that hardly matters for fantasy purposes.  We want pass-catching tight ends in fantasy, which is exactly what Kmet is.  While still a project, Kmet is athletic enough to become a solid tight end in both the NFL as well as in fantasy.

His size and sneaky speed allow him to exploit mismatches with linebackers, and Kmet should become a nice check-down option for whoever is leading the Bears’ passing attack.  I like him a bit more in PPR formats, but he should still figure to be useful even in non-PPR formats.

Evans can be elusive in space at times but remains an inconsistent runner, particularly between the tackles. For 2020, Evans will likely be used as a complementary back, spelling starter Derrick Henry on a few series here and there or playing snaps on designed screens and passing plays.

The Titans used the franchise tag to retain Henry, but they have yet to commit to him long-term. But even if Henry leaves the team after the season, Tennessee would likely add a free agent or 2021 rookie running back, so Evans’s upside is limited. However, given his third-round draft capital, he has potential to be a productive flex play in PPR formats, which could prove to be a decent return this late in rookie drafts.

Gandy-Golden is another physical specimen that needs some polish to succeed at the next level.  The 6’4, 223 lb. wide receiver out of Liberty looks every bit the part of an NFL wide receiver.  In college, Gandy-Golden showed excellent ability to get open and track the ball, albeit against sub-par competition.  And in his final college season, the work he spent on eliminating drops was evident.

If and when Gandy-Golden figures out how to do these things against NFL defenses, he could be scary good, and I’d project him to immediately be useful as a red-zone threat even as a rookie. Question marks at quarterback in Washington don’t help his cause, but that said, there is still a ton to like here about him as a prospect.

The Raiders’ offseason moves have continually contradicted the narrative that Josh Jacobs will be utilized in a workhorse role. In 2019, Jalen Richard and DeAndre Washington combined for 84 targets out of the backfield compared to Jacobs’s meager 27 targets. Jacobs also missed three games with a shoulder injury, which may have factored into the Raiders’ decision to retain Richard on a two-year deal and use a third-round pick on Bowden.

While Jacobs figures to see the bulk of the workload, Bowden earned a high rushing grade in his final college season even filling in at various positions. Las Vegas could build special packages utilizing Bowden in the backfield, out of the slot, or even under center on some trick plays. Bowden is a versatile weapon who could have fantasy RB1 potential if Jacobs were to miss time.

Listed as a running back, Dallas played wide receiver at Miami and even played some quarterback in high school.  A raw talent, Dallas is still learning the position, but I like the fit in Seattle.  Chris Carson and Rashaad Penny both have injury concerns heading into the 2020 season, which could lead to early involvement for Dallas.

It would be wise for the Seahawks’ staff to sprinkle him in as a change of pace option while they determine the best way to use him.  There is fantasy potential for Dallas, but it probably won’t be until 2021 and beyond assuming Seattle moves on from Carson.

Tampa Bay’s selection of Johnson in the fifth round was an absolute steal. The rookie out of Minnesota was Pro Football Focus’s highest-graded wide receiver in 2019, and Johnson recorded the most receptions of 15 or more yards since 2017 and the third-most receptions of 15 or more yards since 2018 behind only Jerry Jeudy and Justin Jefferson. Working best out of the slot, Johnson is a phenomenal contested catch receiver and instinctively finds holes in zone coverage, though his lack of elite athleticism limits his ability to separate against man coverage. His strengths and athletic profile bear likenesses to those of Cooper Kupp.

Target share could limit Johnson’s production though, with Mike Evans, Chris Godwin, and Rob Gronkowski all demanding targets and potentially being moved around into the slot as well. But if Johnson builds a rapport with Tom Brady as his preferred check-down target with the others occupying defensive attention, he could be a flex or better as a rookie in PPR formats with long-term potential for more.

Duvernay comes off a final season at Texas in which he tallied 106 receptions.  While he does possess some speed, at 5’10 and 200 lbs., he is built more so to occupy a slot role in moving the chains for Baltimore.

The ceiling for Duvernay is probably a Julian Edelman type possession receiver who can rack up receptions and yardage if he sees enough target volume with a few touchdowns here and there.  At the very least, Duvernay can be a useful PPR flex play and slot in as another weapon for Lamar Jackson as he continues to develop. I love the potential for him as a role player for the Ravens.

Asiasi is not the next Rob Gronkowski just because the Patriots drafted him, but he does have talent as a receiver and could be a serviceable fantasy option down the line. The rookie out of Michigan recorded just one drop on 45 catchable targets last year, and his 5.6 yards after the catch was impressive for a tight end.

While not a dynamic speedster, Asiasi’s 4.73 40-yard dash time is still notable given his 257 lb. frame, and it’s enough to threaten the seam against opposing defensive backs. However, his biggest strength comes in his ability to create separation with fluid routes. Ultimately, many questions remain about Asiasi’s potential as well as that of the Patriots’ offense as a whole with Jarrett Stidham now at the helm, but the opportunity is there for Asiasi with Julian Edelman and N’Keal Harry as his primary contenders for target share.

What’s your take on this rookie mock draft? Share your thoughts in the comments below!