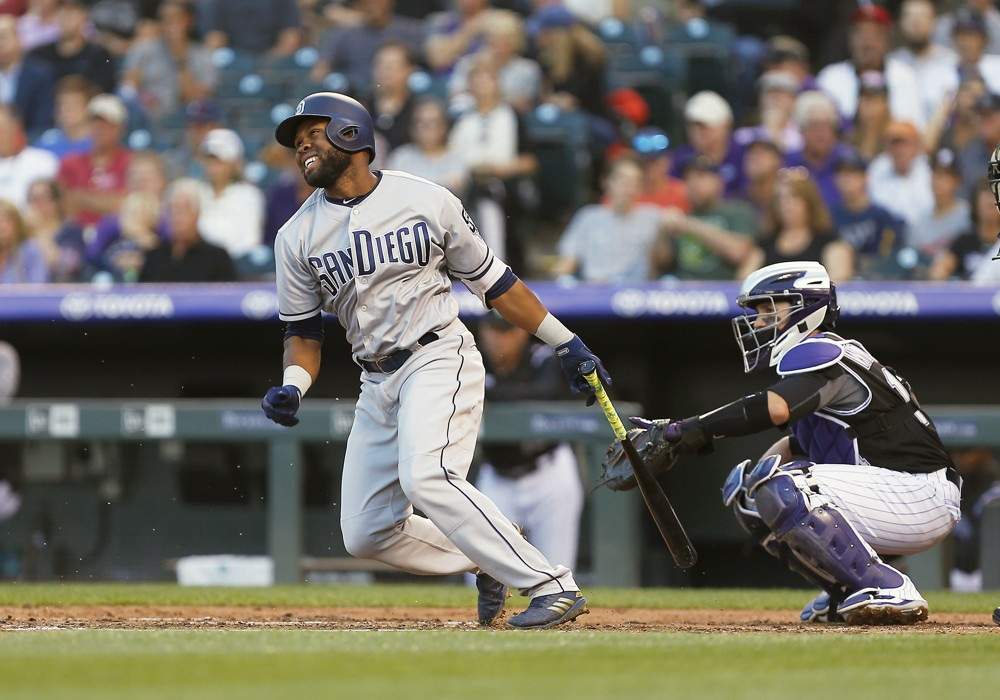 I’ve spent this offseason looking at players whose fantasy stock was elevated or depressed by surprising 2018 seasons. Today, though, I’ll look at a player whose age and physical tools make him an intriguing sleeper in 2019. Manuel Margot has fallen into a bit of post-hype anonymity with a San Diego franchise whose top-notch farm system is more exciting than its current MLB product. Nevertheless, Margot’s only entering his age-24 season, and the physical abilities for impact production are in here.

In December, I noted that Robinson Cano continues to offer an elite blend of contact and power. There, I pulled from Fangraphs splits leaderboard some relevant comps: players within five percentage points of Cano in strikeout rate, hard contact and pull rate. There were 11 matches, most of whom were productive hitters in 2018. Yet one name stood out for closer examination: Margot.

Of the 12 players (including Cano) who combined such infrequent strikeouts with hard, pull-side contact, only Margot hit worse than the .248 leaguewide batting average. In fact, 10 of them hit .284 or better. It might go without saying but hitting the ball frequently and with authority is a good recipe for success. Yet Margot’s results backed up in 2018, and he’s got a .254/.300/.397 career line. So what went wrong?

The most obvious culprit is the pop-up. Margot had one of the league’s highest infield fly ball rates in 2018, depressing his batting average. That plagued him a bit in the minor leagues, too, but his rookie season was nowhere near as extreme. Even if Margot has a bit of a propensity for the pop-up, it’s probably not as severe a problem as 2018 would make it seem. After all, Margot was a hitter in the process of making subtle adjustments last year.

While Margot’s surface-level statistics might not demonstrate it, he showed some signs of improving his power upside in 2018. To see them, it’s worth contextualizing who Margot used to be. Prior to the 2017 season, Fangraphs’ Eric Longenhagen noted that Margot had surprising raw power but was without a swing path conducive to tapping into it. As Longenhagen hypothesized back then, Margot altered that approach to elevate the baseball more often. Yet Margot didn’t perfect those adjustments immediately. While he had a fair amount of airborne contact in 2017, he really struggled to turn on the ball.

Per Statcast, 316 hitters had at least 25 air balls in 2017. Margot placed 314th in pull rate, ahead of only well-known spray hitters Eric Hosmer and DJ LeMahieu. Margot was on track to earning the LeMahieu outfield shift. That changed in 2018. After pulling only 30 air balls in 2017, he lifted 65 batted balls to the left side last season. He’s still not Didi Gregorius, but Margot showed signs of actualizing his raw power in 2018.

What’s more, Manuel Margot elevated pull-side without sacrificing his strike zone control. As Longenhagen warned in his 2017 writeup, swing changes to improve in-game power can sometimes cause a hitter’s bat-to-ball skills to go backwards. Not Margot’s, though. His chase and contact rates remained nearly identical to those from 2017. Maybe the spike in pop-ups had something to do with his focus on elevating, but hitting a few extra pop-ups are worth it if it enables him to threaten 20 home runs annually. Maybe most encouragingly, Margot’s pull rate on ground balls didn’t change all that much. It’s not as if he became so dead-set on pulling that he began to roll over everything. He made a targeted change to elevate air balls, and he did just that.

It’s fair to point out that, for any changes Margot might’ve made, he hit all of eight home runs after hitting 13 the year before. Yet Statcast suggests some of that was poor fortune. Margot’s batted ball metrics warranted more than the results he found. Should he continue to lift the ball to left in 2019, Margot might tap into more power than we’ve yet seen from him at the big league level.

Just as Margot has untapped power upside, there’s elite speed here too, which he hasn’t managed to actualize yet. It’s not for lack of trying; Margot went just 11-21 on stolen base attempts last season. He’s a 70-grade runner, so his struggles have seemingly been about basestealing instincts. Maybe that can’t be corrected, but it’s encouraging that Margot stole at least 30 bags in four of his five minor-league seasons. Terrorizing MiLB batteries isn’t the same as the majors, of course, but Margot’s not devoid of baserunning ability. At the very least, he has the physical talent to be worth monitoring in case his issues are coachable.

Much of Manuel Margot’s appeal lies in his untapped physical upside. He’s not flying under-the-radar without reason. He’s nearly 1,000 plate appearances into his MLB career and hasn’t hit. The fantasy floor here is pretty low. Yet Margot has the traits you’d look for in a breakout candidate: he’s still young, athletic, with the willingness and capacity to adjust his approach. He’s got opportunity, too; San Diego has a bit of a corner outfield glut, but center field is more open. Margot’s more physically gifted than Travis Jankowski and more polished than Franchy Cordero. The Padres can and should be patient with his development. Redraft owners could do worse than taking a shot on Margot’s power-speed upside in the middle rounds, and he could make for an underrated dynasty target. Manuel Margot hasn’t done anything eye-catching yet, but the breakout might be just around the corner.