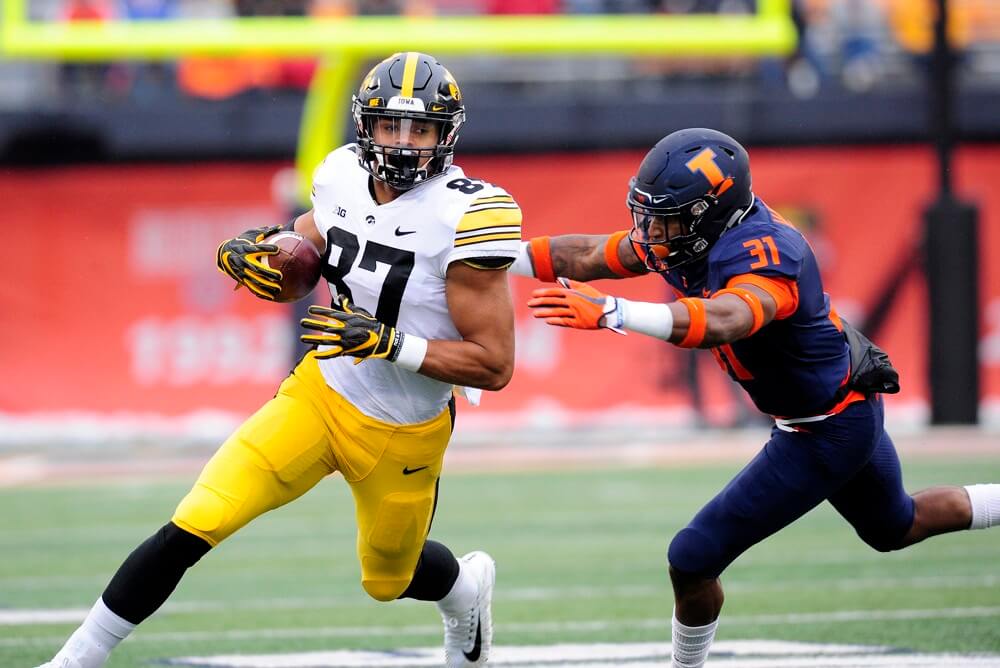 At the tight end position in the 2019 NFL Draft, it’s all about the University of Iowa—a pair of Hawkeyes have a chance at being first-round picks on April 25. And while T.J. Hockenson is generally regarded as the top tight end in the class, teammate Noah Fant isn’t far behind.

Tale of the Tape on Noah Fant

In fact, after watching Fant tear up the track at Lucas Oil Stadium during the NFL Scouting Combine, Tony Pauline of Draft Insider said (via the Philadelphia Eagles website) that he thinks Fant made a case to leapfrog Hockenson.

“Fant was expected to blow it up during Combine testing,” Pauline wrote, “and he did exactly that, timing 4.50 seconds in the 40, touching 39.5 inches in the vertical jump, then reaching 127 inches in the broad jump. Fant was equally impressive during position drills, catching everything thrown in his direction and translating his athleticism onto the field. Fant made the case to be the first tight end selected in April’s draft.”

Ah, Dorin Dickerson. Remember him? Me neither.

However, as Kyle Krabbs wrote for the Draft Network, it’s not like Fant’s athleticism was a state secret—the sort of athleticism at tight end that gets NFL scouts to drooling. “Fant has the physical skills and receiving chops to be the next big thing at the TE position in the NFL,” he said. “The league has never been friendlier to flex targets and Fant runs like a receiver and leaps like a basketball pro. Fant is a nightmare in space and will excel in a vertical passing offense that can implement him in the middle of the field. With soft hands and elite athletic ability, Fant should be a volume target at the NFL level and will have an impact fairly early into his pro career.”

Gavino Borquez of Draft Wire agrees, although he also allowed that there’s a reason Fant was surpassed by Hockenson in the Iowa offense as the 2018 season wore on. “The former Hawkeye is very fluid and flexible getting in and out of his breaks,” Borquez said. “He doesn’t need to slow down to make cuts. He makes some incredibly athletic catches with his strong hands and adjustments when at full speed. Fant will need to get better at in-line blocking, where he has gotten handled due to lack of technique and play strength.

“Overall,” he continued, “at the NFL level, he will be a constant mismatch for opposing teams because he is too fast for linebackers and simply too big for safeties. Fant should have a major impact early in his professional career.”

Borquez slotted Fant as a potential first-rounder in April’s draft. The majority of the draftniks at NFL.com appear to agree—of the seven mock drafts presently posted at the site, Fant is now a Round 1 pick in five of them.

That includes Peter Schrager, who has Fant going the earliest of the lot—19th overall to the Tennessee Titans. “Two Iowa tight ends could go in the first round of this year’s draft,” he wrote. “Fant is more of a natural athlete and potentially a better receiving tight end than Hockenson, a guy many pundits have rated higher.”

For colleague Bucky Brooks, the landing spot is four picks later—the Houston Texans at No. 23. “The Texans need to add more weapons around Deshaun Watson to help him maximize his potential as a QB1,” Brooks said. “Adding an offensive lineman is a priority, but Fant’s prowess in the passing game could be tough to bypass at this pick.”

Daniel Jeremiah, on the other hand, believes the Green Bay Packers could look to Fant with their second first-rounder at No. 30. “Fant is an athletic freak and would be a nice complement to the young WR corps in Green Bay,” Jeremiah said. “Jimmy Graham isn’t the long-term answer at the position.”

Freddie Boston of Fansided is on board with Jeremiah’s idea. “If the Packers go in another direction with their first pick,” he wrote, “there’s a chance Fant will still be there at No. 30. With a top defensive prospect at No. 12 and Fant later in the round, Green Bay could hit a home run on the draft’s opening night. With an offense featuring Aaron Rodgers, Aaron Jones, Davante Adams, and Jimmy Graham already, Fant could be the missing piece the team has needed in the passing game. Averaging 14.68 yards per reception over the past two seasons, Fant could be a great addition to Green Bay’s offense in the first round.”

There’s no denying that Hockenson’s a more well-rounded tight end and a far superior blocker. Combined with the fact that Hockenson’s not exactly cat food as a pass-catcher in his own right, and it’s not that hard to imagine Hockenson being the first tight end drafted—especially if an NFL team is willing to sacrifice some ceiling for a higher floor.

It’s equally facile to imagine Hockenson being the highest-scoring rookie tight end of 2019, as his versatility as a blocker and receiver could easily pave the way to significant snaps early on. Whether that means much of anything for redraft fantasy owners is another matter—the highest-scoring rookie tight end in fantasy last year (Mark Andrews of the Ravens) was 17th in PPR fantasy points. The year before that, however, Evan Engram finished inside the top-five after injuries besieged the Giants receivers.

Fant’s a more similar player to Engram—a wildly athletic pass-catcher with the body of a tight end and the speed of a wideout. He’s (potentially) the sort of mismatch that presents problems for the linebackers and safeties who can’t catch him and the cornerbacks he can body up with relative ease.

It’s that potential that’s so tantalizing—the possibility that Fant could develop into a game-changer at a position where having such a player can give fantasy owners a decided edge.

If you’re the type of dynasty owner that prefers his rookie oozing with upside and have a startable tight end on hand for the 2019 season (or at least the start of it), then Fant’s ceiling at a shallow position is worth chasing more than any other tight end entering the NFL this year.