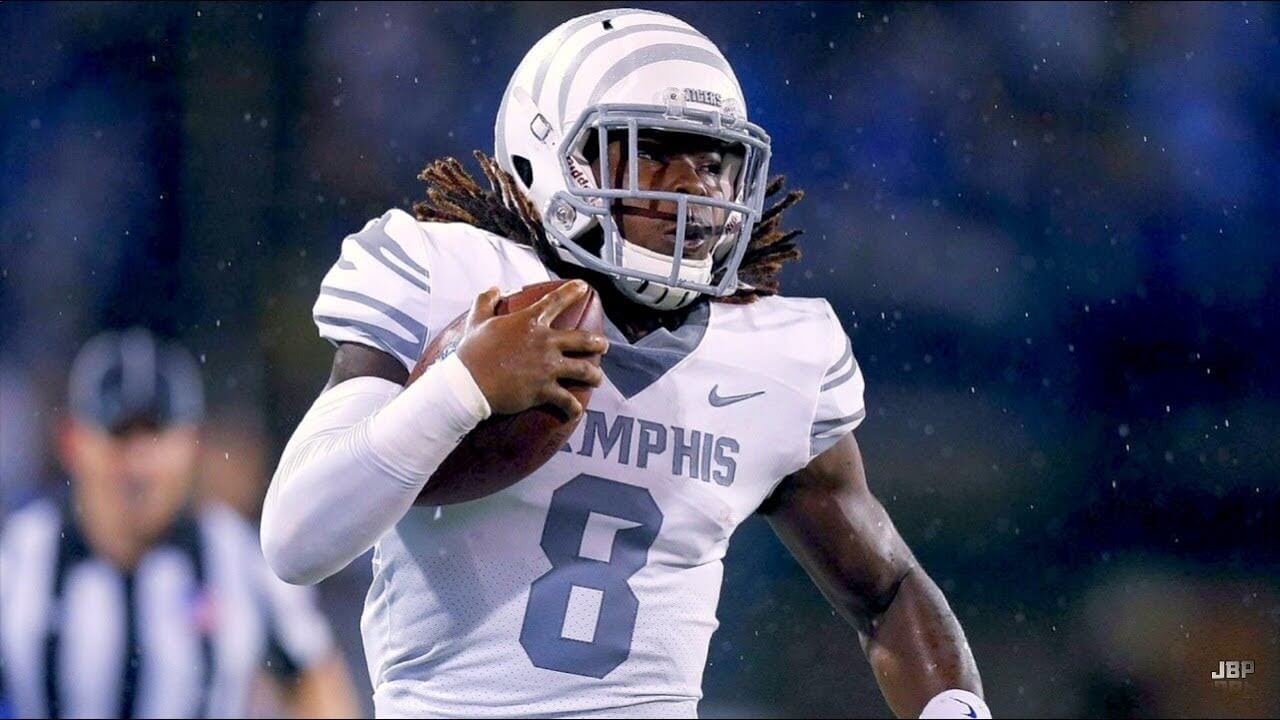 The 2019 NFL Draft is loaded with Day 2 running backs—ball-carriers who aren’t sure enough bets to go In Round 1, but who could (if things fall the right way) become starters at the NFL level in relatively short order.

Among those Day 2 talents in the backfield, you won’t find a more explosive talent than Darrell Henderson of Memphis, a 5’8″, 208-pounder who led the FBS with 1,909 rushing yards last year and averaged just under nine yards a carry.

As Doug Farrar wrote for Touchdown Wire, that jaw-dropping per-touch average was no aberration. “That astonishing 8.9 yards per carry average was no fluke, either – in 2017, he gained 1,154 yards and scored nine touchdowns on just 130 carries, averaging the exact same expanse of field every time he touched the ball,” Farrar said.

Darrell Henderson Most Explosive RB in the Class of 2019

“Moreover,” he continued, “there may be no better back in this class when it comes to running after contact, which may come as a surprise with a player carrying a 5’8”, 208-pound frame. Blessed with a seemingly ideal combination of aggression and second-burst speed, Henderson led all collegiate runners last season with 1,318 yards gained after contact, per Pro Football Focus. And though Henderson is more than capable of breaking off long gainers, he’s also able to gut out the tough yards. 57 missed tackles last season proved that point. In this case, size doesn’t seem to matter when it comes to running with power.”

Benjamin Solak of The Draft Network sees some Kareem Hunt in Henderson’s game—although he also allowed it may take some time for him to realize that potential. “Ideally, Henderson becomes a Kareem Hunt-like player in the NFL — he’ll need some work to get there, though,” he said. “Henderson’s thick frame and great anticipation illustrate some of the best contact balance in this class, and that trait — married with terrific quickness and long speed — make him a threat to reverse field and house it on every touch. Henderson will benefit in the NFL from more complex routes and more frequent targets, as his skill set projects perfectly to that of a heavy RB-target offense.”

“That said,” Solak went on, “Henderson must become more willing to initiate contact to punch at an NFL weight, and teams should be wary of which concepts he runs early in his career. Henderson enjoyed wide highways, paved by his tremendous OL and scheme advantages, on many of his long runs. When things get a little tighter, Henderson has some great reps, but can also run himself into trouble, or look to make too much out of too little. Overall, Henderson is a 15-touch player in Year 1 who can likely bear the weight of a starting job by Year 2, if not Year 1.”

For Lance Zierlein of NFL.com, the player comparison was Tevin Coleman of the San Francisco 49ers. “He checks in slightly undersized, doesn’t have great vision and runs with a narrow base that makes him easier to tackle, but so far, those concerns haven’t slowed him one bit,” Zierlein said. “Big-play production is impossible to ignore, but his running style makes him best-suited to a complementary slasher role in a spread-based attack. In basketball, Henderson would be the explosive sixth man with the ability to swing certain games in your favor if he catches fire. On the ground or out of the backfield, Henderson can catch fire.”

However, at least one AFC scouting director told Zierlein that he fears Henderson’s production may have been buoyed at least in part by playing in the American Athletic Conference. “He’s really fast,” the scout said, “and those numbers for two years are hard to ignore but can he translate? When you go watch just the touchdown runs, there are a lot of bad fronts that he gets to feast on.”

Those misgivings aside, Henderson’s home-run ability has also made him a favorite of many in the fantasy football community. “I fell in love with Darrell Henderson’s film,” Dan Schalk of My Fantasy Sports Talk wrote, while comparing Henderson to Dalvin Cook of the Minnesota Vikings and ranking him second among this year’s RB class. “He was ultra-productive with the Tigers, leading the nation in rushing while taking the rock nearly nine yards every time he touched the ball. His feet are constantly moving and his speed is rare (his 40-time does not do him justice). He is the biggest home run threat out of this entire RB class evidenced by his 43 carries of 15-plus yards and 11 total touchdowns of 54-plus in 2018 alone. At 5’8 scouts are questioning his size and ability to handle three-down duties. His pass protection will need some work, but he is a solid receiver. The only knock I have seen consistently on tape is his upright running style–and the fact he rarely saw many stacked boxes while at Memphis. Put him in an offensive system that will allow him to work in open space and watch out.”

Kyle Yates of The Fantasy Footballers is also a fan, pointing out Kansas City as a potential best-case landing spot. “Henderson has the skillset and tools to step onto the field Day One and dominate for fantasy football,” Yates said. “He has the speed to break off the long TD run but also combines that with the power to pick up the tough yards in between the tackles. With that combination of speed and power, his balance, shiftiness due to his size, and superb vision, Henderson should be in the conversation for a top-5 rookie pick in Dynasty drafts if he lands in the right spot. He has all the traits to succeed no matter what his landing spot is…with that being said though, the Kansas City Chiefs have a need at running back and Henderson would be a perfect fit in that offense. If Henderson does end up taking handoffs from Patrick Mahomes, there’s a good argument for him to be RB1 in this class and worth considering with the 1.01.”

The first overall pick in dynasty rookie drafts may be pushing it barring a dream scenario—like Henderson landing with a team whose offense suits his skill-set and who would offer a clear path toward a significant workload early in his career. It’s just as likely—if not more so—that Henderson will land with a team that would use the youngster as more of a committee option, at least to start.

Henderson also doesn’t have the highest fantasy floor of this year’s rookie backs. There are valid concerns, whether it’s Henderson’s size, lack of vision when running between the tackles or lack of pass-protection skills.

With that said though, Henderson’s explosiveness is undeniable—explosiveness that portends a fantasy ceiling that could well be the highest of any tailback in the Class of 2019.

If Henderson is able to work on those weak spots and comes close to realizing his immense potential over the first couple years of his NFL career, the sky’s the limit. He could be much more than just a weekly fantasy starter. He could be a stud.

And that sort of upside can be hard to pass up on draft day.