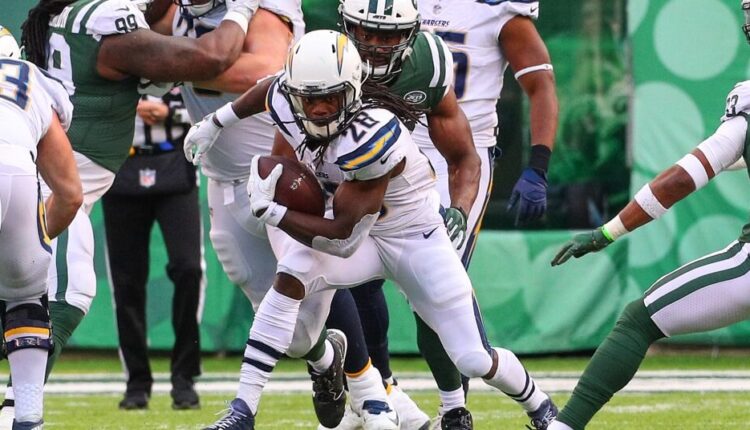 This preseason has been among the most chaotic in recent memory. The big story early in the summer was the impending holdout of Chargers running back Melvin Gordon. Not only has no progress been made on that front, but Cowboys star Ezekiel Elliott has followed suit. It is a situation that has many fantasy owners on edge. Many fantasy players are understandably gun-shy after Le’Veon Bell sat out the entire 2018 season due to a contract dispute. Word around the campfire is that Elliott is closer to inking a deal than Gordon is. As a result, most fantasy players are still drafting Elliott with a top-five pick. Gordon’s ADP has dropped into the fourth round in recent drafts. He slots in much lower than that in my latest rankings update.

I took Gordon fifth overall in Street and Smith’s mock draft back in May, but now I’m out. Los Angeles has two very capable backs in Austin Ekeler and Justin Jackson. Together they can shoulder the workload in the Chargers’ backfield. The Chargers also have some winnable matchups early in the season. Gordon’s leverage may wane if the team wins their first few games. If Gordon acquiesces and ends his holdout, he would be a steal at his current ADP. As for Elliott, he has proven he is still an elite fantasy player even if he misses a game or two. He has yet to play all 16 games in a season but still has two rushing titles in three years. The decision on whether to draft Elliott or Gordon (or both!) is dependent on your aversion to risk.

Elliott and Gordon are not the only running backs whose rankings are affected by their potential holdouts. The other running backs for both teams have seen their draft stock rise with the likelihood that they may be in line for increased roles. When the summer began, drafters were often selecting Tony Pollard after Round 20. Now you would be hard-pressed to find him available after Round 10. The same can be said of Justin Jackson in Los Angeles. Austin Ekeler already figured to be relevant in fantasy, and his ADP is also much higher now than it was a few weeks back. When Gordon first announced plans to holdout, Ekeler was being selected outside the top 40 among running backs. Now owners are taking him by the end of the sixth round. All three will continue to be solid values the longer these holdouts linger.

As if the holdouts of two of the league’s best running backs wasn’t enough to navigate, many of us were dealt a shocking blow when Andrew Luck announced his sudden retirement on Saturday night. I had Luck third among quarterbacks in my initial rankings. Once it became possible that Luck may not begin the year, I dropped him down to 15th. That felt too low at the time given how prolific he was last season. Provided Luck does not return to replace Tom Brady in two or three years, I wish him all the best. Jacoby Brissett will now lead the Colts’ offense and will be solid, if unspectacular. All Colts skill players have seen their draft stock drop like stones ever since Saturday. I think the hate has gone too far, and I think there could be some nice values here.

I still consider Marlon Mack to be a top-20 fantasy running back. Yes, he may demand some more attention from defenses. But an increase in volume would more than make up a reduction in efficiency. As of this writing, I would much rather have Mack than Gordon in Round 4. T.Y. Hilton has finished as a WR2 or better in each of the last six years in standard leagues. His worst finish came in 2017 with Brissett under center. However, the circumstances were a bit different that time around. Brissett has had a full year to digest Frank Reich’s offense. He had less than a week to learn Indy’s offense in 2017. I can understand the skepticism, but few receivers should have a greater target share than Hilton. He is still a top-15 receiver for me.

Luck’s retirement overshadowed the loss of Houston running back Lamar Miller to a torn ACL and MCL. Miller was looking like a decent value, but he will now miss the entire 2019 season. Speaking of values, perhaps not even Brissett has seen a bigger spike in value over the last month than Duke Johnson has. Three weeks ago, Johnson was unhappy and demanded a trade from Cleveland. He was buried on the depth chart and was an afterthought in the Browns’ offense. In July drafts, fantasy owners were drafting Johnson outside the top 50 running backs on average, even in PPR leagues. But a trade to Houston gave Johnson a massive boost in value. I was all-in right away.

I said at the time that I thought Johnson was capable of being much more than a passing-down specialist and that he had RB1 upside in PPR leagues even with Miller in the fold. The likelihood of Johnson now approaching 15 touches per game only increases that he reaches that threshold. Miller’s injury has helped propel Johnson’s ADP into the fifth round in some cases. I still don’t mind the cost. The return on investment may not be as great as it was a month ago or even a week ago. But Johnson still has league-winning upside as a versatile back in a high-powered offense. He is a top-20 running back for me in all formats. Since I was in on Johnson before Miller’s injury, I think it’s only fair that I get to draft him everywhere. Thanks in advance, league mates.

Oh, by the way, NFL Commissioner Roger Goodell reinstated New England Patriots wide receiver Josh Gordon. Goodell had previously banished Gordon indefinitely back in December for multiple violations of the league’s substance-abuse policy. Gordon applied for reinstatement earlier this month, and it was granted in short order. He will return to the Patriots to bolster their suspect receiving corps. Gordon still has the talent and opportunity to be a fantasy force. During the 12 weeks he played last season, he was the overall WR27 in PPR leagues. Fantasy owners are currently valuing Gordon as a mid-range WR3 and drafting him at the end of the sixth round. The risks are obvious, but so is the upside. This is another instance where drafters will have to determine whether the juice is worth the squeeze.

We haven’t even discussed any of the position battles that have affected player values over the last six weeks. There will be further fluctuations in the market once NFL rosters are trimmed down to 53 players on Saturday. The possibility of a high-profile trade or two still exists, which could alter things even more. In the meantime, here are my 2019 fantasy football rankings for standard, PPR, and half-PPR leagues. Please keep in mind that subtle differences in scoring systems and other league configurations can have a major impact on how we value each player as well as each position group. Feel free to comment below or hit me up on Twitter if you have any questions regarding your drafts or teams. There’s still plenty of time to sign up for another league in our draft lobby so put these rankings to good use and secure the bag!