What if I told you there was a third baseman with more home runs than Kris Bryant, more RBI than Josh Donaldson, more runs than Manny Machado, and a better batting average than Nolan Arenado in their last 750 plate appearances? Oh, yeah, and he was still being drafted in the 18th round? It’s true, baseball season is still months away, but we have enough draft data to give us a glimpse into what 2018 drafts could look like … and it’s … well … a little weird. So let’s do it. LET’S GET WEIRD. Here are a few of my picks for overvalued and undervalued players, according to Fantrax’s early ADP.

The 28-year-old Merrifield took many by surprise last season when he stole 34 bases in 145 games after stealing just eight in 81 games the previous season. He also was a solid contributor with a .288 batting average and popped 19 home runs. However, repeating might be a struggle based on what I consider to be an overrated hit tool. My fear is investing too much in Merrifield and getting only stolen bases. His 2017 5% walk rate is bottom-10 for all qualified hitters, and he hits a large number of flyballs for someone who I would expect to utilize his speed to get on base. It’s not that I don’t think he can be a top-10 second baseman; it’s just that I’m not willing to pay a top-100 overall pick to get him.

Odor is a mess. He is a one-category contributor, with that category being power. He did hit 30 home runs last year, but so did 40 other players. In fact, 117 players hit over 20 home runs in 2017, making Odor’s home runs that much less valuable. The difference between Odor and the other 117 hitters with plus power is that they didn’t post a .252 OBP or a .204 batting average. It’s really tough to provide runs or RBI with those types of numbers. But, wait, he also stole 15 bases last year? True, but in his four-year career, he has just 39 steals in 66 attempts (66% success rate). If Odor doesn’t turn things around at the plate, he could be in jeopardy of losing playing time. Also, with his poor stolen base success rate, it wouldn’t shock me if he gets single-digit steals in 2018. For that, I’m way out on Odor as a near top-100 pick.

Seager has been a model of consistency since his first full season with the Mariners in 2012, playing in no fewer than 154 games for six consecutive seasons now. But that consistency is also what makes him a risk. I’m not in the business of predicting injury, but I’m also not in the business of predicting health and Seager’s per-game production is nothing to get excited about. Seager is 1,000 games into his career, and his 162-game averages are a .263 average with 25 home runs, 78 runs, and 85 RBI. With little to no help in stolen bases and a mediocre batting average, Seager doesn’t provide enough upside to justify a top-150 pick.

Morton is one of my SP bargains going into 2018. His increase velocity over the last two seasons has really boosted his strikeout numbers. Morton struck out 163 batters in just over 146 innings last year and followed it up with a masterful performance in the playoffs. Another plus for Morton is how he is been able to limit home runs by using his sinker. Morton is one of only five starters to have a K/9 of 10.0 or better with a HR/9 of 0.9 or better in at least 140 innings. Others on that list include Strasburg, Kluber, Carrasco, and Jimmy Nelson. Considering Morton is showing up as the 47th starter off the board, this is an easy decision.

Much will be said about Acuna over the next several months leading up to draft season, and his stock will likely continue to climb as we get closer to Opening Day. Although he’s only 19 years old, Acuna has first-round potential, and his skills appear to be big-league ready. In 162 total games played this year between High-A, Double-A, Triple-A and the Arizona Fall League, Acuna batted .325 with 28 home runs and 46 stolen bases. We have seen more and more young players make immediate impacts in the big leagues. Given a half season or more of regular at-bats, Acuna will be a draft-day bargain around pick 150.

Where do I begin? In case you haven’t figured it out yet by scrolling ahead, Beltre is the third baseman I was referring to in the intro. Plain and simple, Beltre has kept up with the studs at the top of the third-base rankings when he is on the field. Yes, he is 38 years old, and yes, he is coming off an injury-plagued season where he played in only 94 games. And no, I don’t care. In the seven seasons prior to last, he averaged 148 games played and received MVP votes each of those years. Beltre is criminally undervalued at pick 175. 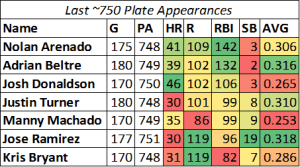