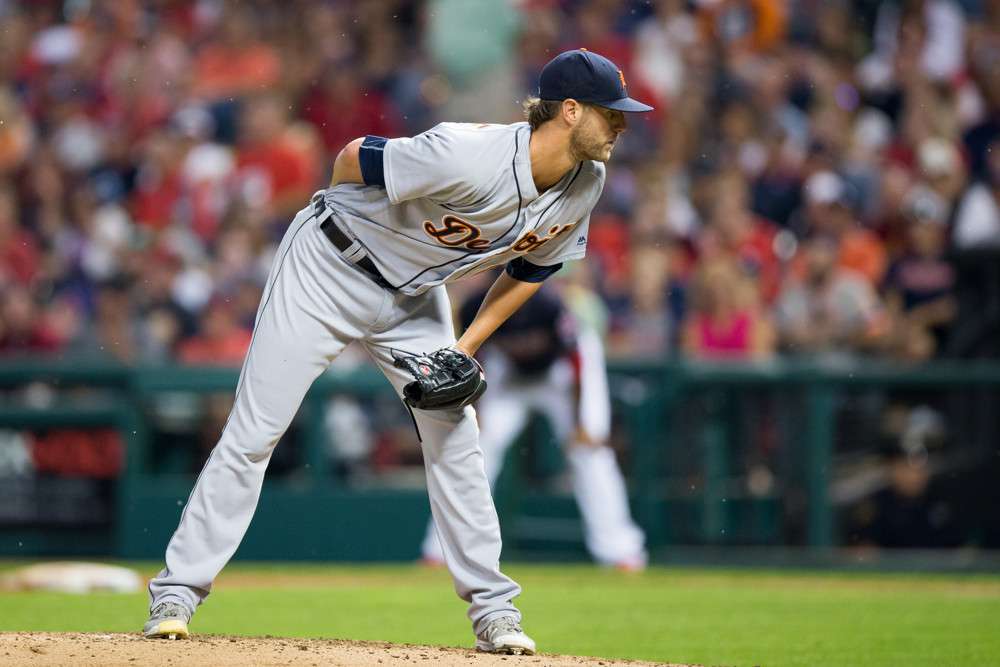 Well, folks, here we are. It’s the end of the line for my 2018 Dudes and Don’ts, and it’s my first foray into calling D&Ds at closer. They’re an incredibly volatile bunch, and with so many bullpens still unclear as we roll into the season, one call could be completely wrong within a few days of me writing this. All it takes right now is one bad outing for one of the guys vying for a job to bump him way down the closer depth chart. So what the hell, let’s have some fun! It is fantasy, after all. To the Dude!

Greene is the color of money, baby! Shane Greene spent his first full season in the bullpen in 2017, and he acclimated himself quite well. His overall walk rate doesn’t impress (4.52 BB/9 over 67.2 IP), but a look into his season splits shows improvement. His walk rate over the first half of the season was an abysmal Corey Knebel-like 4.91, but over the second half, he dropped that to a more palatable 3.95.

He also got a bit fortunate in terms of first-half BABIP, and if you look at his 2017 FIP and xFIP, they were both over a run higher than his 2.66 ERA. His xFIP of 4.24 is almost enough to make you pee your pants a little. Although, you would then be pretty cool in the eyes of Billy Madison. Greene’s first-half BABIP was just .242 despite a 46.1% hard contact rate. That BABIP regressed to .299 in the second half, but with his lowered walk rate, his FIP was just 3.82 (that takes into consideration his elevated 91.2% LOB%). In addition to the improvement in walks, he lowered his hard contact allowed to 34%, which is far from elite but something you can overcome when you have a 26.6% K%.

The biggest knock on Greene, and probably the biggest reason he is only going as the 26th RP off the board (237 overall), is because he’s on a bad team. The Tigers do project to be awful, but bad teams can still have closers that net 30+ saves. There is also the fact that he is a likely trade candidate at the deadline since the Tigers will be looking to sell off more veterans to get prospects for their rebuild. I’ll cross that bridge when it comes, and you can guard against that negative by picking up his likeliest replacement at the time. As of now, that looks like Alex Wilson, but he’s hardly breathing down Greene’s neck for the job, which is another plus for Greene’s fantasy value. I’ll project Greene like he’s the Tigers closer all year, but be warned that that might not be the case.

It’s hard enough to take relief pitcher stats seriously with a full season being a small sample in itself. Take a reliever who missed more than half the season following surgery to relieve a blood clot, and your small sample size (SSS) turns into a seriously super small sample size (SSSSS). If you say that acronym aloud, someone will think you’re impersonating a snake. So, what I’m about to discuss bears the caveat of being a SSSSS, but what we did see is a bit alarming.

Familia had tingling in his fingers before the surgery, so I’m willing to chalk up his 8.0 BB in 9.1 first half innings to that physical issue. However, over the second half, his K% was down to 22.1% as he seemed more like a groundballer (62.8% GB%) than a power pitcher. If this transition sticks, the lowered Ks means less fantasy value. There was also a complete collapse in a lot of his plate discipline stats:

So that gives a guy pause. Familia should be healthy in 2018 and that alone should help his numbers bounce back, but Mickey Callaway has also mentioned using a bullpen by committee. I’m not sure how much I buy into that, but it’s enough to keep me away from Familia this year, especially with A.J. Ramos behind him. Managers tend to say it’s a committee until the first guy gets a clean save and then they stick with that guy until he implodes. As the 16th closer off the board (174 overall), I would want more stability in both the pitcher and his role to invest. Familia no es mi familia.

I actually deleted Joakim Soria and changed it to Nate Jones as I was writing this. Like I mentioned off the top, closers are volatile! Rick Renteria came out and said that both Soria and Jones will share closing duties to open the season. Like I mentioned with Familia, that generally doesn’t last long. Renteria will almost certainly establish a favorite early. That brings me to another fantasy maxim — draft skills, not roles. To me, that says Nate Jones.

Soria actually had a solid 2017, with a 3.70 ERA (2.23 FIP), and a 10.29 K/9 with a 3.21 BB/9. He also limited opposing batters to a 27.2% hard-contact rate. The White Sox also just signed him to a $25 million contract this offseason, so you would think the incentive would be to put him in the closer role and rack up saves. However, Jones is on a very nice contract himself, so the White Sox don’t have to worry about paying him for saves in arbitration. Also, he’s 32 already. I don’t know if that surprises anyone else, but I figured Jones was something like 28. I forgot how old he was when he debuted.

Jones had surgery in June 2017 to fix his ailing elbow, missing the rest of the season. He would toss only 11.2 innings, and his walk rate was an uncharacteristic 4.63. He looks great this spring, though, and should be good to go for a normal reliever workload. Steamer projects him for a 10.59 K/9 and 3.22 BB/9, which could even be conservative (as Steamer tends to do … a lot). While Soria was better than his surface ERA from 2017 would indicate, I’ll take Jones’ skills over Soria’s. By the way, Jones had a sub-1.00 WHIP in both 2015 (SSSSS) and 2016. They’re right next to each other in drafts, with Jones at RP36/289 overall, and Soria at RP38/295 overall. They’re so cheap that you can try to draft both of them and hedge your bets, or just pick them off the waiver wire if you’re in a shallow league.