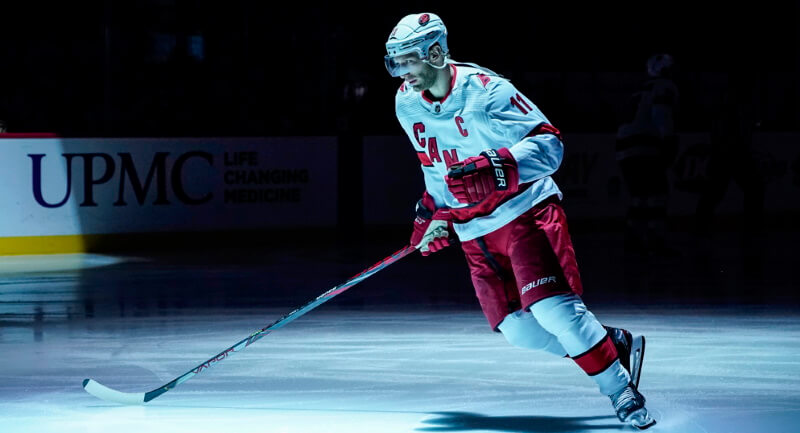 It’s human nature when forming your fantasy league team to become focused on the sexy stats like goals, assists and points. In leagues where your categories run deep, there are often sleepers who fly under the radar but who are monsters in one or two categories that often get overlooked. I am going to take a look at eight players who can either steal you a category in head-to-head play or provide you coverage in multiple categories.

Who? You’ll be forgiven if you have never heard of Hakanpää. One of the more fun names to say out loud. Go ahead and try it, we’ll wait. Hakanpää is a 28-year-old rookie who has spent most of his career in the Finnish Elite League. Not only do you get the benefit of possibly utilizing the Finn from your minor league spot, but he also sits 9th in the NHL in hits and 5th overall in blocked shots. If you are suffering in these categories Ha-kan-pää is your man. Also who doesn’t like a name with double umlauts?

At 32 Staal isn’t really at a point of his career where he is sneaking up on anyone, but don’t look now, he is scoring at just over a PPG with the high-flying Hurricanes. His 39% shooting percentage is clearly not sustainable but the brother of Eric and Marc is also a face-off monster, winning over 55% of his draws. When healthy he can easily hit the 700 mark for FOW and even in this condensed season he may clear 600. So, when his point protection inevitably regresses back to his career average of around 0.50 PPG he will still be one of the better category sleepers for your team in both Face-offs and plus/minus.

Lowry has not been known for his offensive production in the past so his current scoring pace of slightly over 0.60 PPG may not be something he keeps up. That said he is generating more offensive chances this season and he is getting 2nd PP minutes. Lowry has upped his SOG over previous seasons. Typically he was taking just over 1.0 SOG/game, he is now at an even 2.0 SOG/game while scoring at a reasonable 12.5% shot percentage. Based on this it would not be far-fetched to see Lowry maintain this season’s production. As a center who has over the years been winning well over 50% of his draws, Lowry adds very good category value in FOW as well.

A big part of Foligno’s value lies in his ability to line up in all 3 forward positions. This versatility in Fantasy Leagues that require daily lineup settings is a gift. Over his career, he has consistently produced at a 0.50 PPG rate while also providing positive numbers in Hits, FOW as well as adding incremental value in PP Points. For leagues with deep rosters, Foligno is a very good depth addition.

Hoglander is another minor league eligible player, who has had a very good start to his NHL career, averaging 0.50 PPG after his first 20 games. He is also generating over 2.0 SOG per game and is #3 in the league in takeaways with 18. Hoglander has tremendous offensive upside but even if those numbers aren’t doing it for you the fact that he has positive numbers in multiple categories should make Fantasy managers take notice.

Murray had a truly horrible start to the season flashing an .869 Save percentage after the first 7 games. If you throw out the one bad performance he’s had over the last 8 games he has rebounded with a .940 sv%. The wins may still be hard to come by on the cellar-dwelling Senators but you can expect Murray to continue to climb toward his career .912 sv%. For leagues that offer Saves as a goalie category, Murray sits #11 in the league.

Dvorak is a player that had off-the-chart offensive numbers in Junior. Since cracking the Coyotes lineup as a 20-year-old he has produced at a reasonable rate of 0.45 PPG. Now in his 5th season, he has pushed his production to over 0.75 PPG. Dvorak is also listed at both LW and C, so the flexibility this adds in lineup setting also provides value. His face-off production is #15 overall in the league and he is on Arizona’s first PP unit, making him a great add in most head-to-head leagues.

Larsson may always be infamously known as the player traded straight up for Taylor Hall. He has never lived up to his #4 overall selection in the 2011 NHL entry draft but he has significant value in Fantasy Hockey. Larsson currently is #1 in the league in blocked shots and #8 in hits. He will never be known for contributing much offense but in fantasy leagues whose rosters run deep, he can provide you excellent point totals in these two categories.

Analyzing your fantasy team’s rosters and finding your team’s weaknesses can go a long way to fantasy league success. It’s worth taking a deeper dive on your league’s waiver wire to dig up some of these sleepers who may be among the leaders in the nuts and bolts categories of your league or who provide solid multiple category coverage.

If these category sleepers aren’t enough for you, then you should probably check out the Week 6 Goalie Streams!